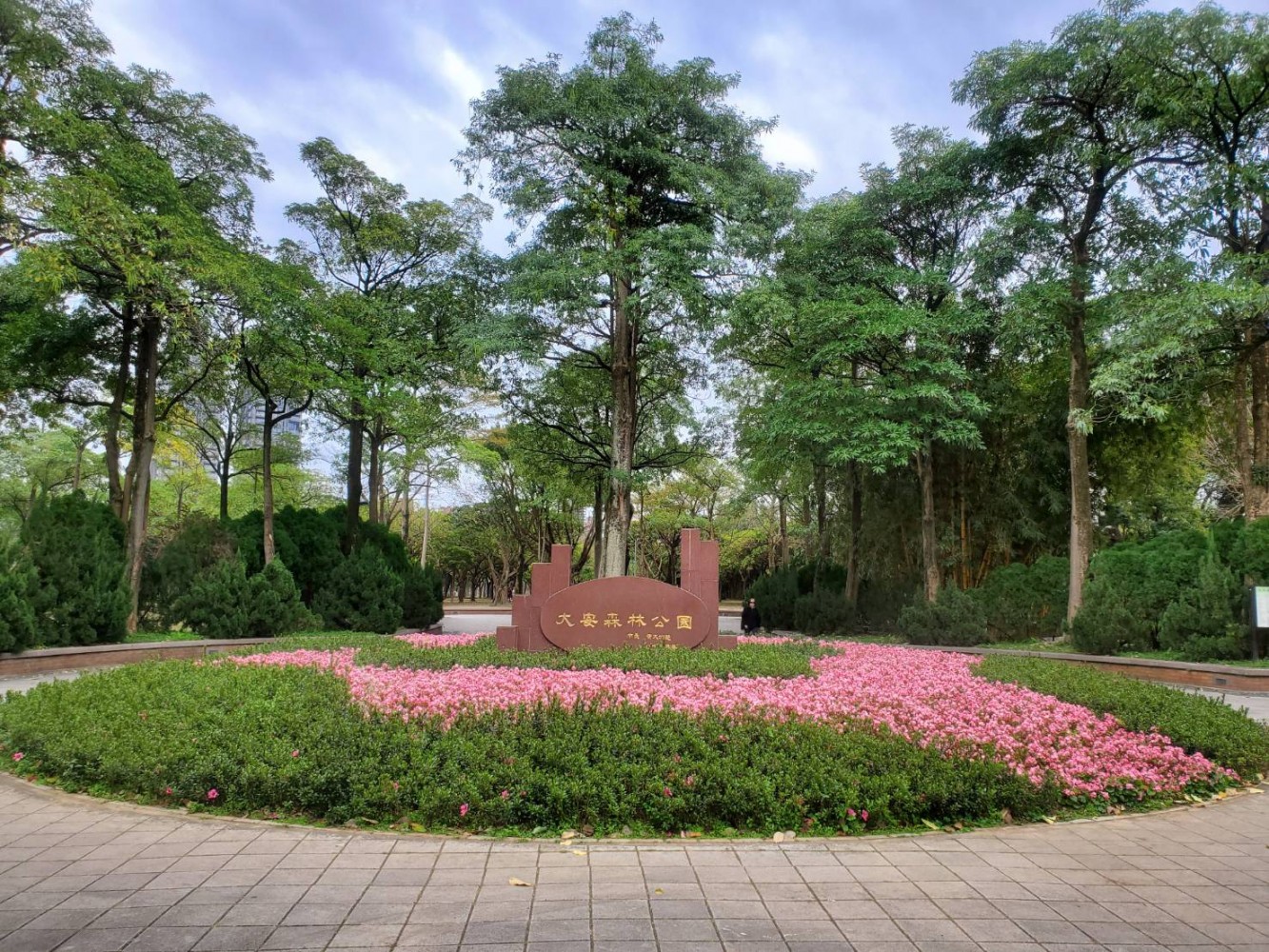 With an area of 25.9293 hectares, the Daan Park is located in Daan District, the center of Taipei City. It borders Jianguo South Road in the east, Xinsheng South Road in the west, Heping East Road in the south, and Xinyi Road in the north. In response to urban development, the Parks & Street Lights Office accelerated the park construction project in 1985. Through the efforts of all parts of society, the park opened on March 29, 1994.
As a rather new park, park facilities are novel. In the park, arbors are green and thick, shrubs are tidily aligned, flowerbeds and flowers are attractive and shining as if it was a park in the forest. In the main entrance plaza (junction of Xinyi Road and Xinsheng South Road), flowers and leaf plants are densely grown in flowerbeds. A special park scene is formed together with the Buddha statue area and bamboo area (where Buddha’s belly bamboo, green bamboo, stripe common bamboo, Makino bamboo, and square bamboo are grown) in the south. A natural pond up to about 0.7 hectares sits in the west of the park. Golden dewdrop, painted copperleaf, canna, and golden trumpet are grown around the pond and on the rockery in the pond. Creeping fig is grown to decorate the rockery’s interior and koi is raised in the pond to attract visitors to them. As a center of cultural and arts performance in the city, the open-air theater with 900 or more seats in a natural slope design sits in the central park. Fragrant flower plants that attract birds and butterflies are grown around the theater, including orchid, cape jasmine, common jasmine orange, orchid tree, dwarf champace, and sweet Osmanthus. Besides an aromatic site, it is an accessible area in the park. Looking over the park from the east on Jianguo South Road, palm trees are in sight to create a Southeast Asia feel. These palm trees include royal palm, Alexandra palm, California Washington palm, bottle palm, fishtail palm, and canna. Walking inside, it is like strolling in a tropical palm forest.
Two main paths penetrate the park from the east to the west and one from the south to the north. Arbors and shrubs are grown extensively along the paths, and flowerbeds are planned to decorate the interior view. The park is designed upon a forest park concept. Besides attractive green plants and trees, there are facilities including 12 kiosks and alcoves, phones, water fountains, 7 accessible public toilets with diaper changing stations and child safety seats to provide comfortable and multifunctional services. Roadside trees are also grown extensively on the pavements around the park. Yellow flame trees are grown on Jianguo South Road. Camphor trees are grown on Heping East Road. Paperbark trees are grown in Xinsheng South Road. Bayan trees are grown in Xinyi Road. In the central part of pavements, fragrant maple trees are grown. Multi-level green fences are erected along the park boundaries. During the flowering season, the yellow sage grown along Jianguo South Road is a color palette decorating the park like colored ribbons. A jogging path was built under the dual-layer arbors on Xinsheng South Road in 2004. Another jogging path was built on Heping East Road in 2005.
Located in the city center, the Daan Park is swarmed with crowds every day, particularly in the morning and at sunset when neighboring come doing exercise, strolling, dancing, and frolicking in the park. A children’s playground is in the northeast corner of the park. The two- Peacock palmstory underground car park provides spaces for up 1,452 cars to resolve the parking problems of visitors from afar.
In Taipei City with a crowded population, severe air pollution, and serious urban heat island effect, this purely recreational “urban forest” park of 26 hectares is doubtlessly a refreshing “lung of the city” that cleanses dust and purifies air, reduces noise, and regulates temperature. Taking a break in the park, one can watch flowers and trees and enjoy musical performances, enjoy a “forest bath” to refresh the body and mind. Strolling in the park, one will discover that there is beauty everywhere, and all park functions are demonstrated.