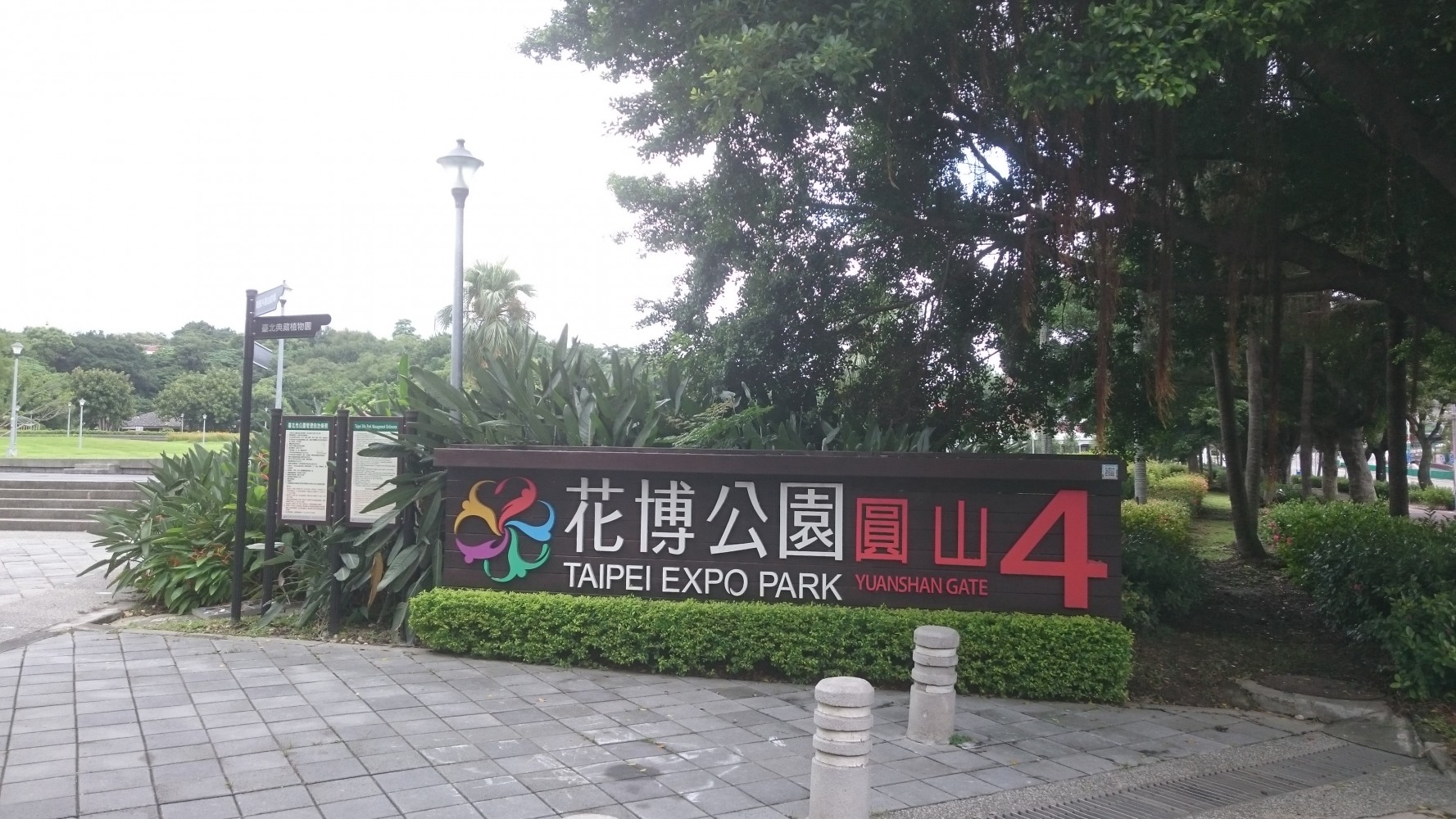 The Yuanshan Area of the Taipei Expo Park is located east of the Taipei Metro Yuanshan Station, south of Taipei Children’s Amusement Park, west of Zhongshan North Road, and north of the EXPO Dome. Completed in 1978 with an area of about 15.3 hectares, it was one of the four major exhibition areas of the 2010 Taipei International Flora Expo.
As the second largest among the four exhibition areas during the Expo, the Yuanshan Area has the 3-dimensional Green Walls, Flower Landscape, Rare Flowers & Plants Area, and Fruit Tree Area. The exhibition halls in the area during the Expo included the EXPO Dome, EXPO Theatre, and Pavilion of New Fashion (FE EcoARK). The EXPO Dome was remodeled from the Zhongshan Soccer Stadium for the Expo. In the Dome there are the Floral Rainbows, where the Shanghai Garden, Xian Garden, and Food Court are in the east.
After the Expo, facilities including the 3-dimensional Green Walls, Flower Walls, and Flower Landscape are retained. The “3-dimensional Green Walls” was the main entrance of the Yuanshan Area. Besides growing perennial flower and leaf shrubs to demonstrate the color spectrum of flowers, a character entrance landscape has been created with lighting at night. The original slope design is retained for the “Flower Landscape” featuring a lawn on which flower shrubs like the dwarf ixora, azalea, green-tinge spider lily, and flaming trumpet and herbs are grown. The original food court between the EXPO Dome and Pavilion of New Fashion (FE EcoARK) is renamed “MAJI MAJI Food Square,” which is also a marketplace for agricultural products on holidays. The park is near the Taipei Metro Yuanshan Station with convenient transportation. The Taipei Children’s Amusement Park is in the north and the EXPO Dome is in the south (where different events are held from time to time). In the near neighborhood there is also the Dalongdong Shopping Area and Qingguang Shopping Area. Therefore, the park is great for visits on both weekdays and holidays for all. 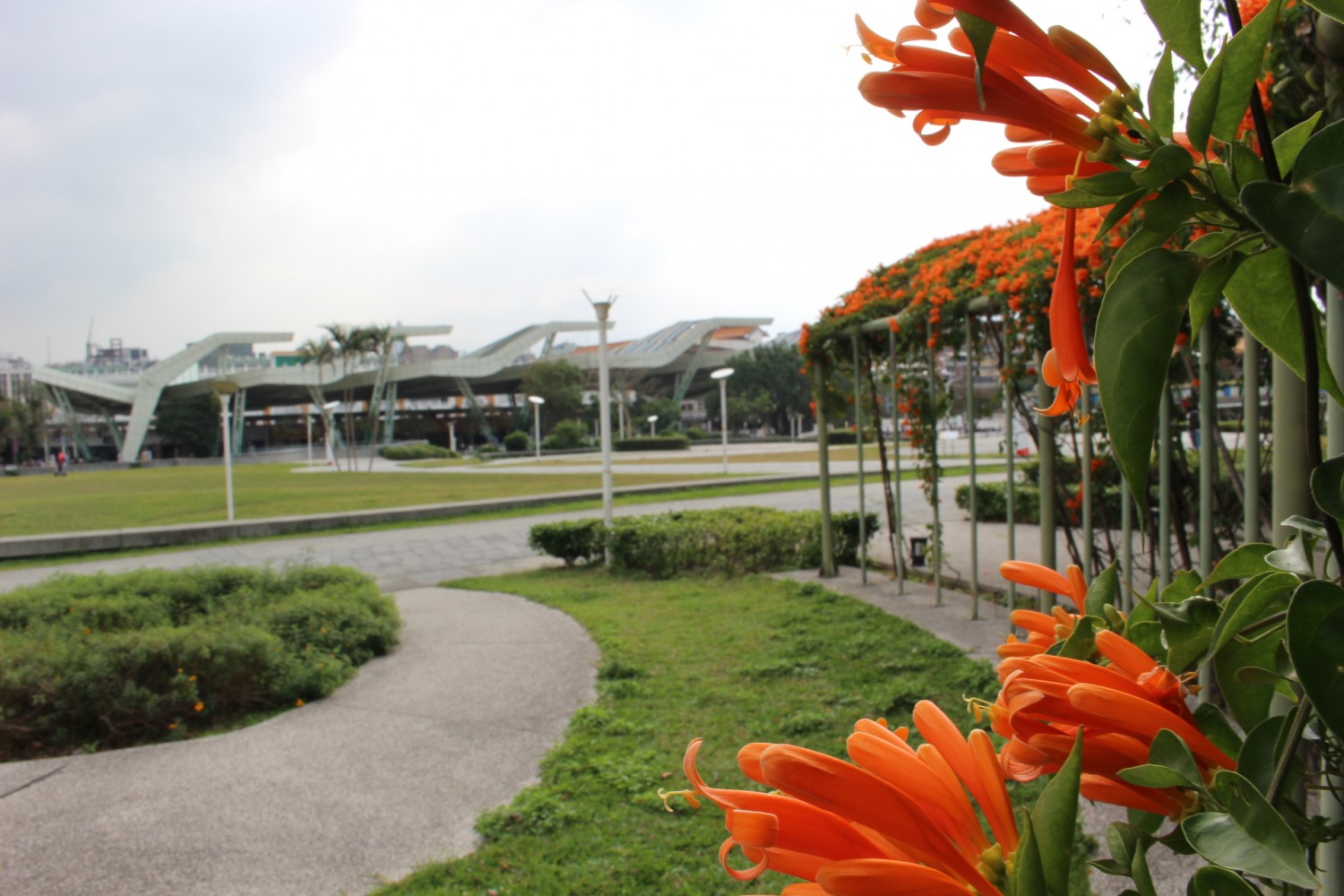 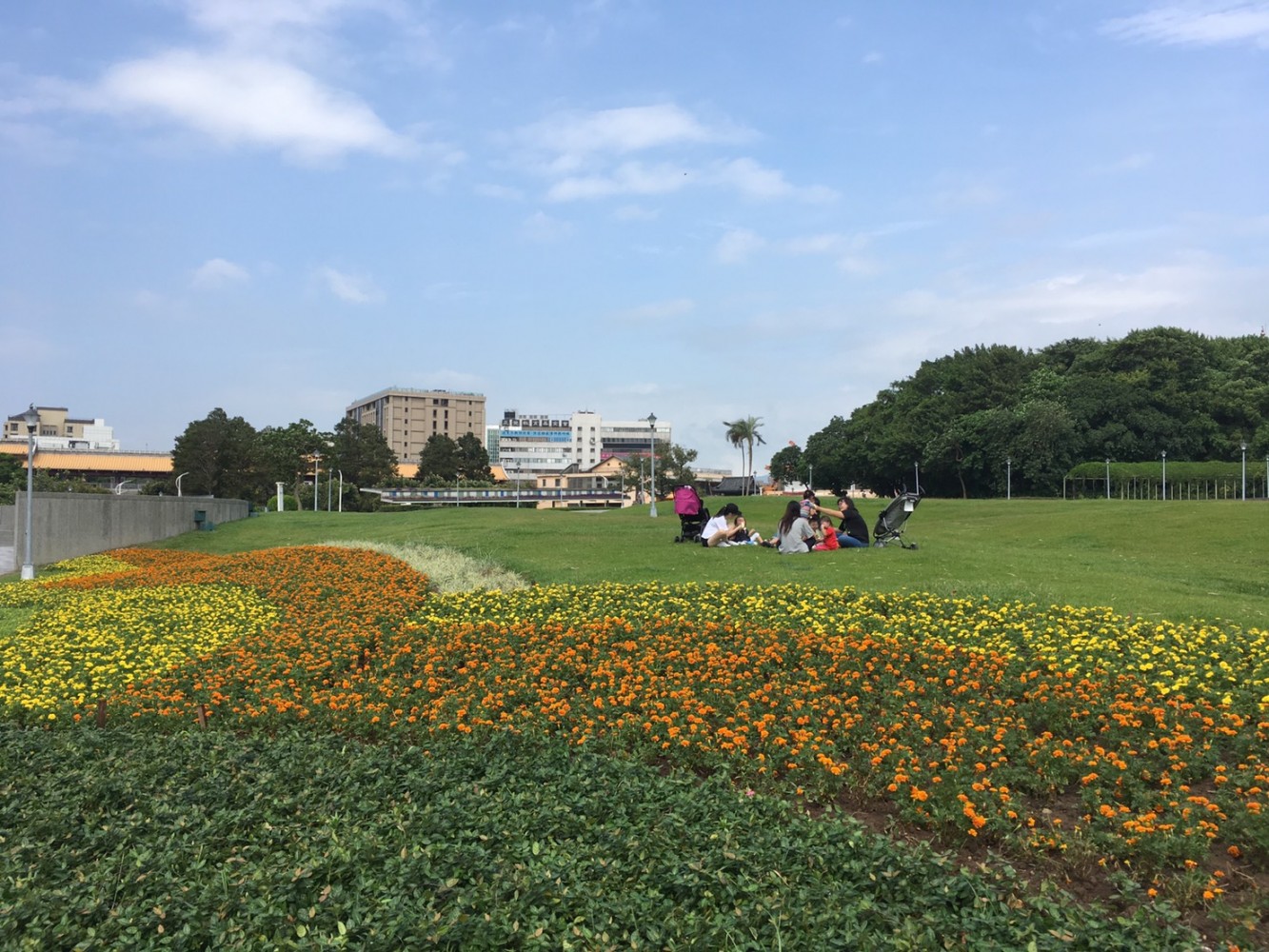 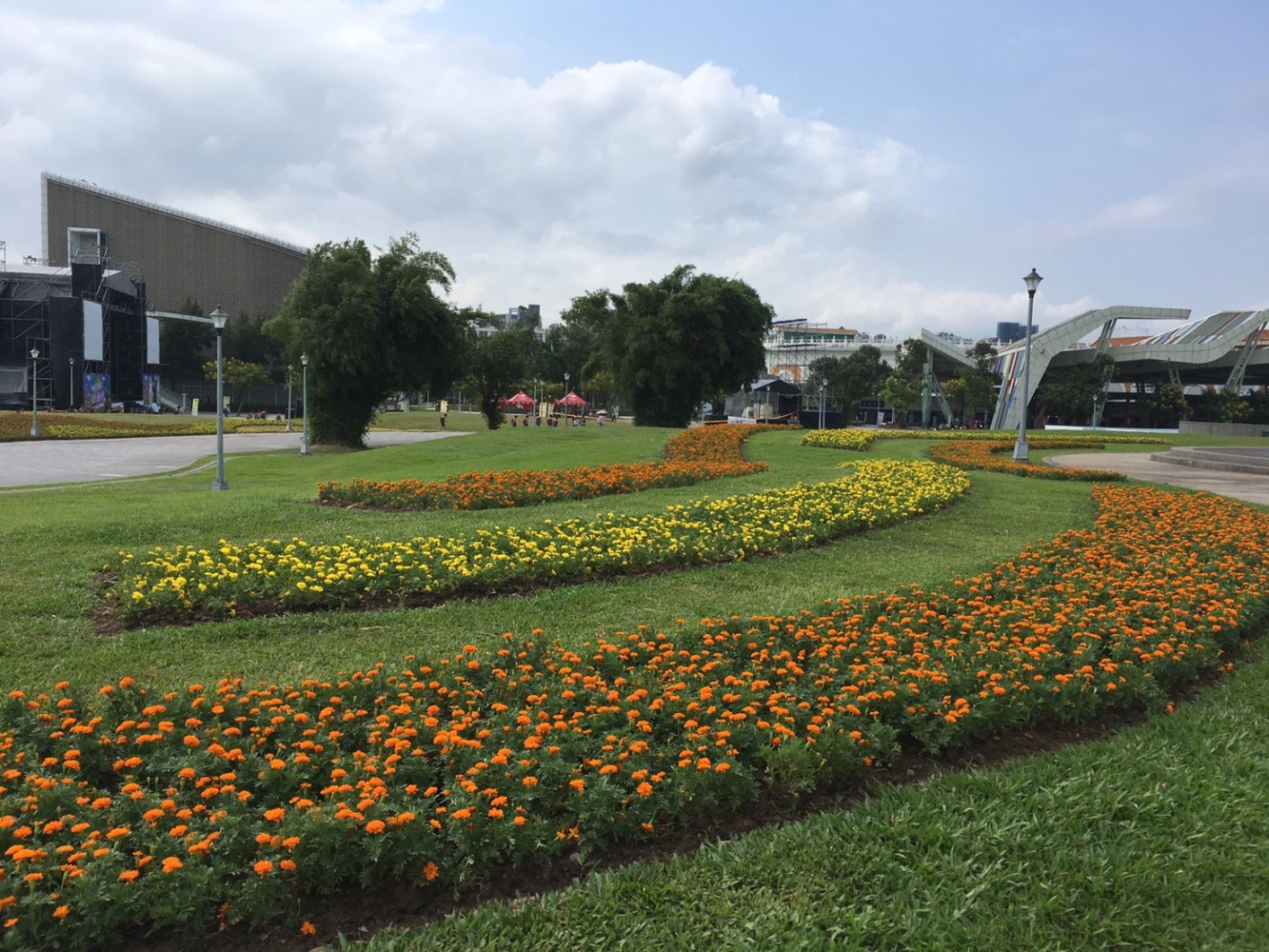 A corner of the Yuanshan Area of Taipei Expo Park. 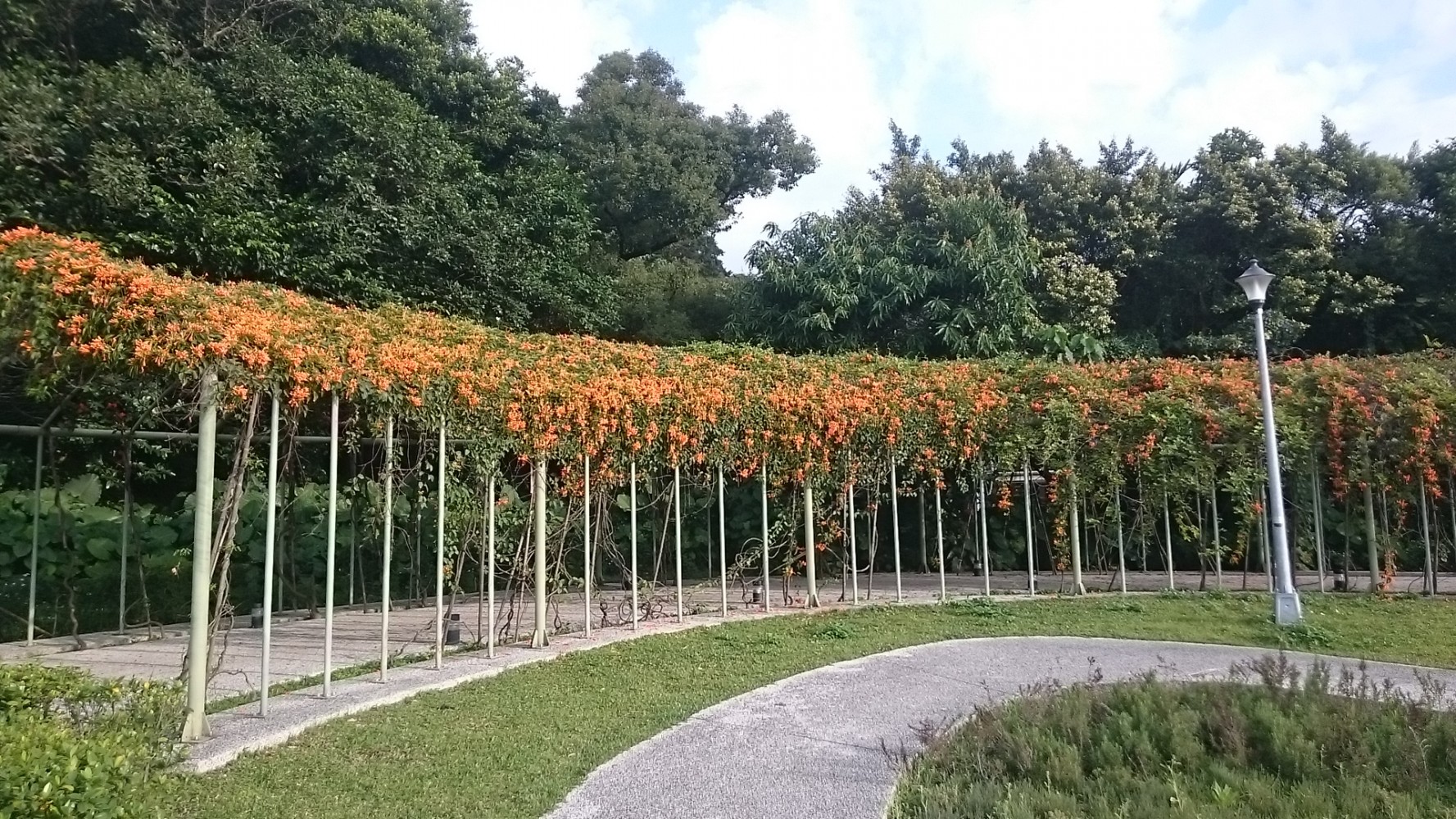 The common cypress scene next to the Taipei Metro Yuanshan Station.

Adults are chatting and children are running on the lawn in the Yuanshan Area of Taipei Expo Park.