The Shilin Residence Park is located southeast of the junction of Fulin Road and Section 5 of Zhongshan North Road. The residence surrounded by Mt. Fushan occupying an area of 13 hectares was the Horticulture Branch Office of the Government-General of Taiwan during Japanese colonial Taiwan. After the restoration of Taiwan, it was expropriated by the Agricultural Research Institute, Department of Agriculture and Forestry, and Taiwan Provincial Government, and became the Shilin Horticultural Research Institute. In 1949, the Taiwan Provincial Government built seven guesthouses in the area. Before the National Government migrated to Taiwan, Taiwan Governor Cheng Chen at that time searched for a site to build the presidential residence personally. As the park site is quiet and secluded, embraced by mountains on three sides with gorgeous scenery and convenient transportation, he chose this location to build the presidential residence. In 1950, late President Chiang Kai-Shek officially moved in. Until he passed away in 1975, late President Chiang Kai-Shek spent a quarter century in the present-day park. As late President Chiang Kai-Shek lived here, no new construction or reconstruction works were allowed in the Shilin Residence, the Horticulture Management Division, and nearby areas. Therefore, the original natural landscape and appearance of the site were maintained. When strolling in the park, visitors can unexpectedly see colorful butterflies flying across the flowers, squirrels shuttling across the wood, eagles gliding in the air, and other surprises are everywhere. Before 1996, the entrance on Fulin Road was blocked by the bamboo wood and a thicket, except for a secluded path. Therefore, people could hardly see what was behind, making the residence more mysterious. This is the original look of the Fulin Entrance. As the residence has been swarmed with visitors after its opening to the public, the present-day Fulin Entrance Plaza was planned and constructed in 1998 to replace the once secluded and refined access with a spacious plaza. The plaza also symbolizes welcoming all with open arms. In 2006, a catchy image sign for the Shilin Residence Park was erected at the Fulin Entrance. In 2007, a green belt of about 0.6 hectares was built in the northeast of the residence. Entering the park, one can see the parking of late President Chiang Kai-Shek’s car (the car we see today is the car that used by late Madame Chiang from 1988 to 2004). Walking inside, the Amphitheater built in 1998 with 700 seats is there for citizens to give and enjoy musical performances. Opposite to the Amphitheater sits Mt. Fushan, where there is a two-story pavilion called the “Ci Yun Pavilion” (Pavilion of Maternal Love) linked by three stone stairs. It was built in 1963, with the name tablet hung in 1972. From the pavilion, Shezidao and the Tamsui River are the sights in the west, and visitors can enjoy the sunset of Mt. Guanyin. Due north are the gorgeous scenes of Mt. Yangmin, Mt. Datun, and Mt. Qixing. The main building is the two-story residence of late President Chiang Kai-Shek and Madame Chiang. It is the important and most mysterious building in the site. The residence is maintained by the Department of Cultural Affairs of the Taipei City Government. It has been opened for public visit with tickets since January 27, 2012. A guesthouse sits north of the main residence. Despite its humble look, it has been the accommodation of many international guests, including two former US secretaries of state: John Foster Dulles and David Dean Rusk. In the rose garden there are 76 plots of rose farms. It was the favorite place for a stroll of late Madame Chiang because of the rose aroma. The plum blossom, the favorite flower of late President Chiang Kai-Shek, is grown between plots to symbolize the lifelong accompaniment of the couple. The fountain is the center of the western garden, and the flowerbeds, tree fences, and garden paths are all symmetrically planned in the Baroque garden style with various beautiful flowers. The Chinese garden sits west of the western garden. It was built in 1966 to celebrate the 80th birthday of late President Chiang Kai-Shek. In the Chinese garden, there are rockeries, zigzag ponds, arch bridges, and an octagonal kiosk in the south. Different sections of the garden are connected with zigzag paths toward secluded places, bringing a sharp contrast to the western garden. The Victory Chapel was built in 1949 with a humble look and simple interior design. The chapel with 60 seats was the place where late President Chiang Kai-Shek and Madame Chiang went to service. Others joining the service there were either important government officials or VIP guests. The Xinlan Pavilion (lit. New Orchid Pavilion), also called the “Sho Pavilion,” was built in 1950. It is called “sho” (lit. birthday) because it was where the birthday banquet of late President Chiang Kai-Shek was held every year. Late calligrapher You-Ren Yu personally inscribed the pavilion’s name in Chinese. Today, orchid shows are held in the venue. A memorial stone tablet with the characters “新蘭亭記” (lit. An Account of the New Orchid Pavilion) also written by You-Ren Yu was erected next to the Xinlan Pavilion. In October 1950, all poets in Taiwan gathered there to make poems. It is another important sight of the residence. The Horticulture Exhibition Hall was built in 1984. Apart from decorating the venue with in-season flowers regularly, exhibitions and horticulture training activities are held there from time to time to enrich the horticultural knowledge and interest of citizens, making it a venue for both beatification and education. 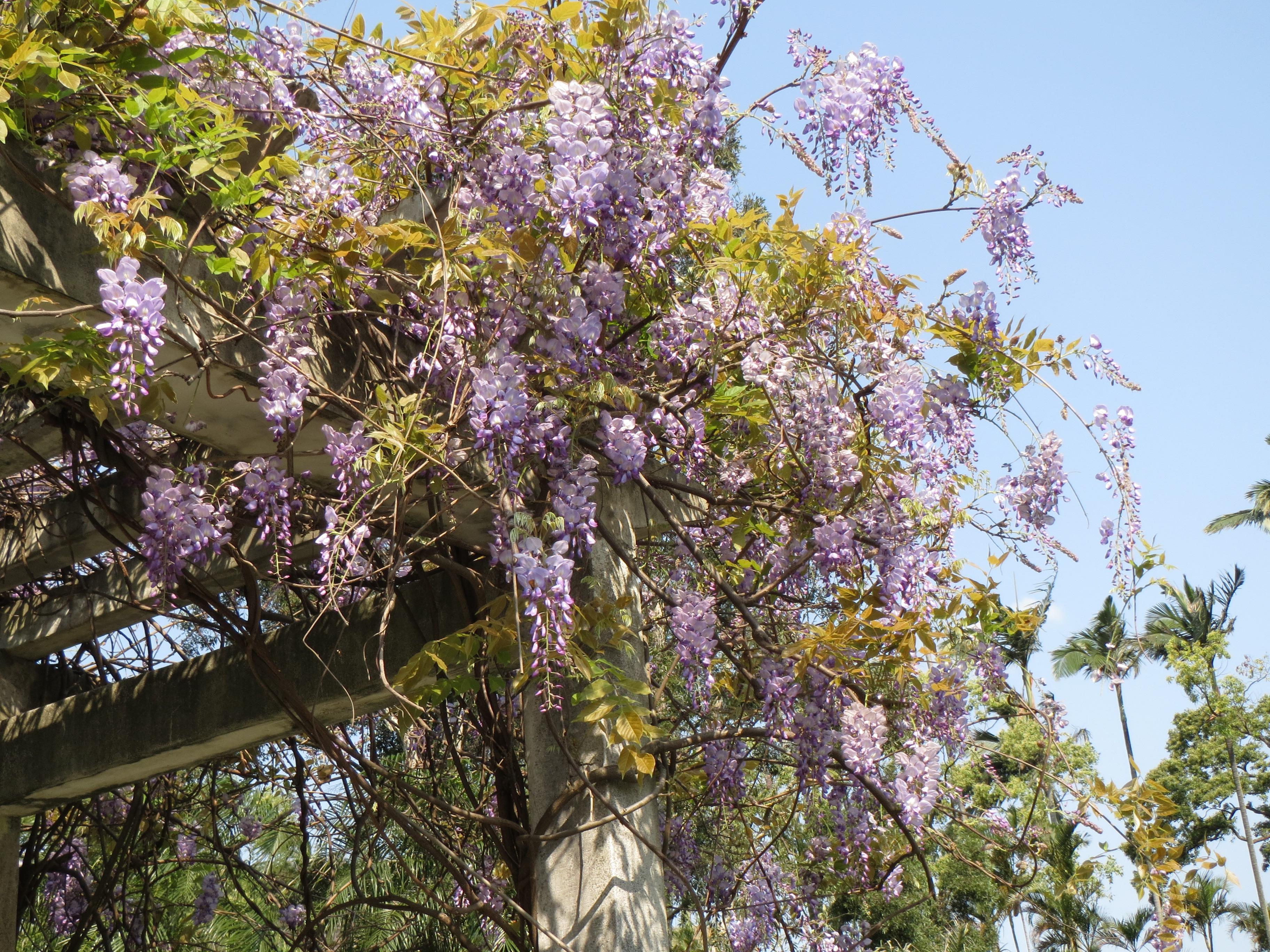 Chinese wisteria in the Western Garden 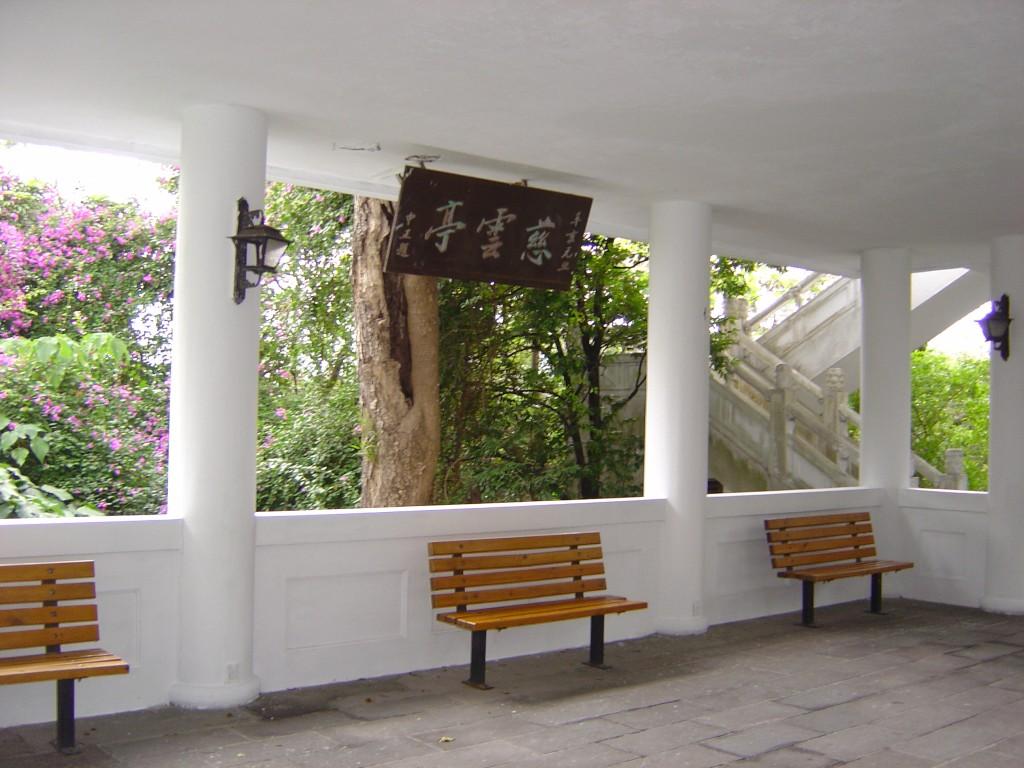 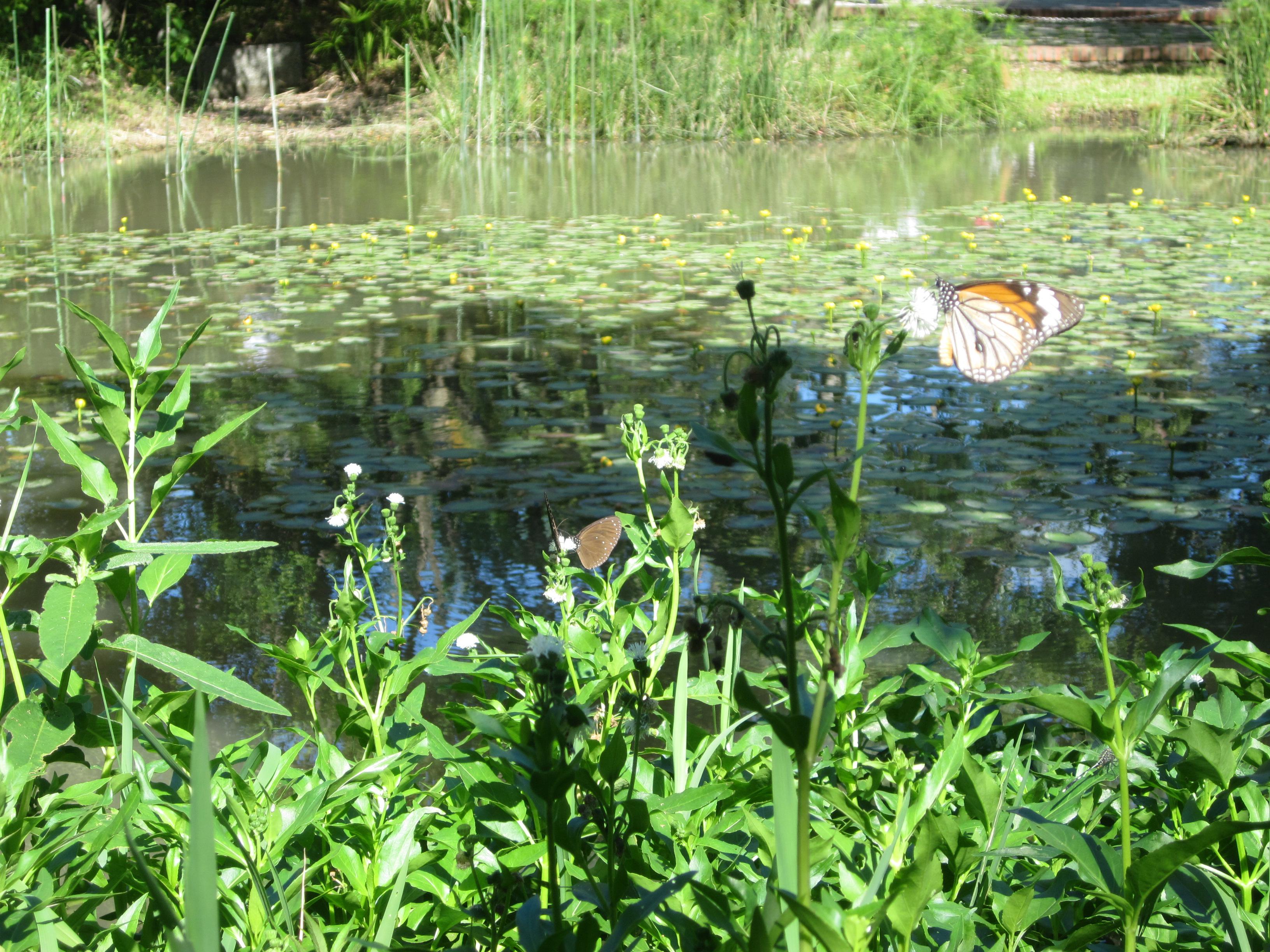 Butterflies in the Ecological Garden 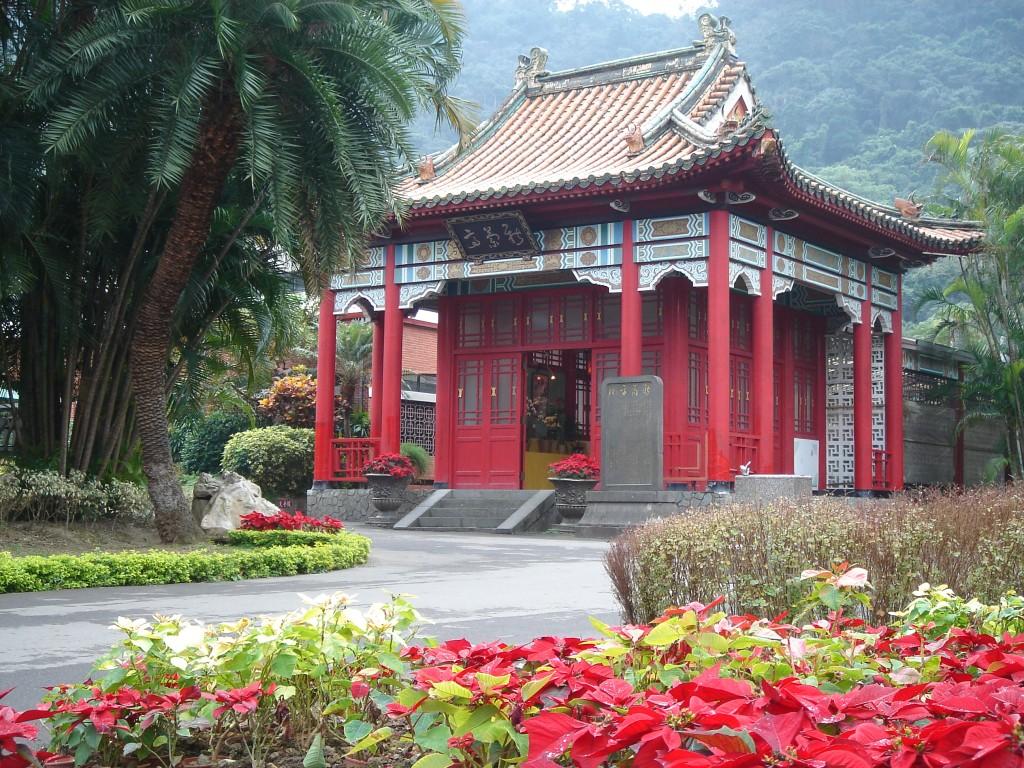 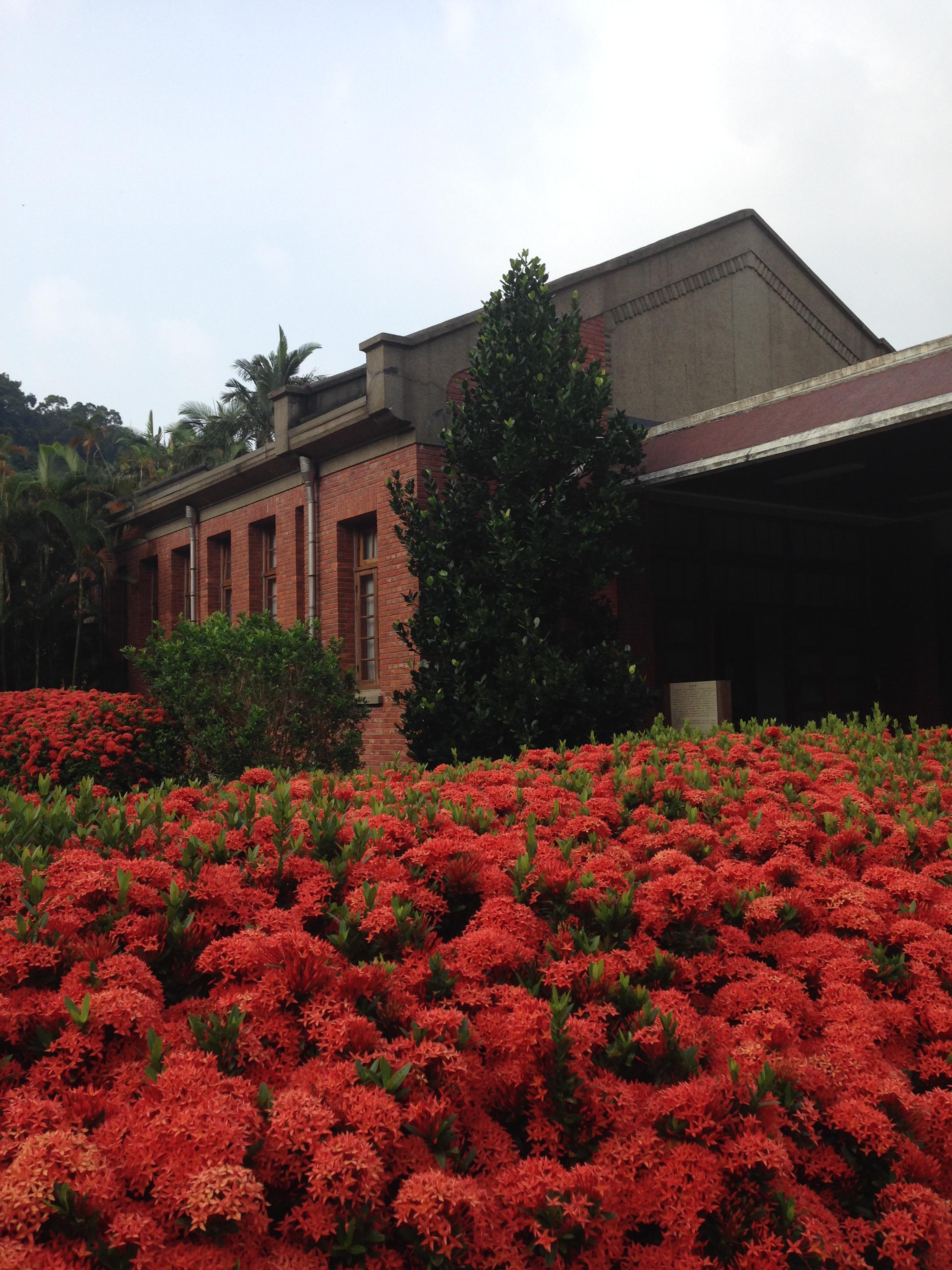 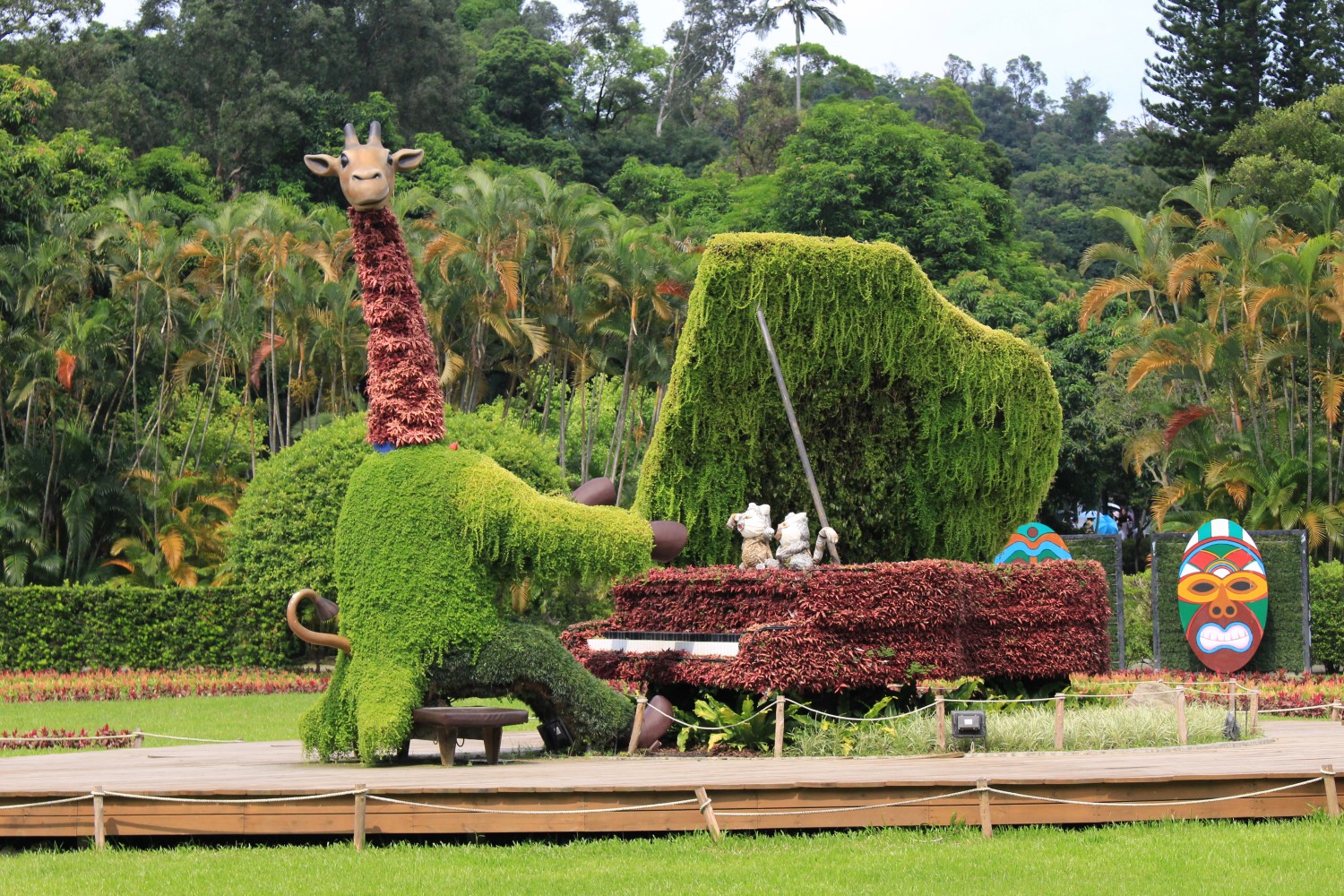