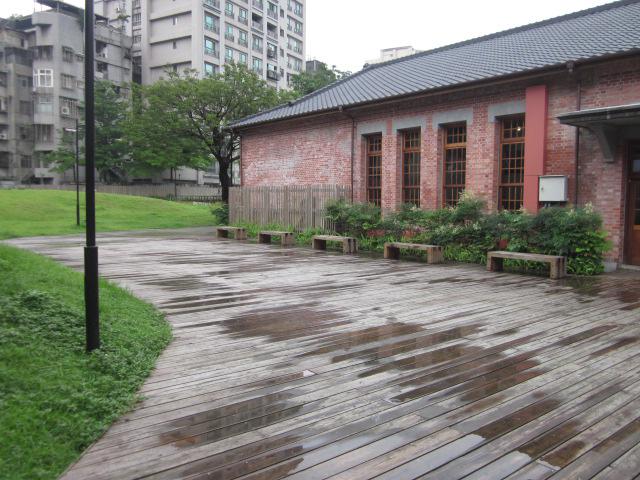 Rebirth of Nishi Hongahji (Wanhua 406) Square, a new pearl of Ximen block. Wanhua 406 Square located at the junction of Section 1, Zhonghua Road and Section 2, Changsha Street sits in the historical site of the Taiwan version of Nishi Honganji Temple buildings, including the temple building foundation, mausoleum foundation, rinbansyo, Jushin Hall, bell tower, and approach to the temple. Through the active restoration of the Parks & Street Lights Office, Public Works Department, Taipei City Government, the temple square reappears in a brand- new look with its ancient charm. In the future, the square can be combined with tourism and leisure space including The Red House and Ximen shopping area to link fashion and culture to the historical sites in Taipei.
As the largest Japanese-style Buddhist temple in Taiwan, the Nishi Hongahji buildings were built during 1923–1934. After WWII, Nishi Hongahji has been the Taiwan Garrison Command, the settlement of mainlanders and immigrants from central and southern Taiwan, and home of the “Chinese Li-ism Headquarters” recording the history of Taiwan’s politics, urban immigrants, and religion. After a fire in 1975, the temple declined and became an illegal building that vanished into urban Taipei. It was not until 2005 when the Taipei City Government demolished the illegal buildings and implemented simple greening of the area that the historical site of Nishi Hongahji buildings reappeared in the Taipei corner.
The original buildings were in extremely poor condition after long-time abandonment. Through the interdepartmental collaboration of the Taipei City Government, the Jushin Hall and bell tower were first listed as city historical sites and then the rinbansyo, temple building foundation, and mausoleum foundation as city historical buildings. Then, the Parks & Street Lights Office of the Public Works Department began with the revitalization planning and restoration according to the original look of these historical buildings, including the Jushin Hall named after the “Jushin Butsuchi” (Purifying Heart in the Dharma Land) horizontal tablet bequeathed by the colonial Governor Kodama Gentaro. As the front roof truss and most parts of the wooden components, e.g. doors and windows, were burnt down before the restoration, the Parks & Street Lights Office restored them with Japanese cedar and Taiwan cypress wood. The hall is equipped with sash windows containing a weight in the pane to prevent the sash from falling down while opening the window. Besides a strong ancient charm, the wooden sash windows also bring a fragrance of log. The rinbansyo was the dormitory of on-duty staff. It has a strong Japanese style, such as the Japanese hut truss system and bamboo-mud walls. After the restoration as is, besides being a site for the demonstration, promotion, and research of culture and history, the hall has also become a great spot for exploring authentic Japanese architecture. After the restoration, the Bell Tower sitting on the rockery will be the only bell tower in Taiwan with free access for exploring the taste of traditional architecture and enjoying the whole picture of the square. In the future, blessing ceremonies requiring ringing the bell can be held at the square. While the temple building of Nishi Hongahji was burnt down, after the restoration the building will become a theater for various modern, traditional, or musical performances. The Approach is the road from the main entrance to the temple building. It was built with slates that were either broken or lost. Slates of similar texture will be used in the restoration.
After the restoration, the Department of Cultural Affairs will run the square through revitalization. In the future, with the historical, cultural, and architectural features of the Nishi Hongahji historical buildings, Wanhua 406 Square can extend and expand the Ximen popular culture zone to become a shining star in Ximen shopping area. The restoration of the Bell Tower and the appearance of Jushin Hall and rinbansyo has been completed, and the replica of the bell has also been installed in the tower. Instead of the unfriendly look of general construction projects, the restoration of the Nishi Hongahji buildings is filled with a historical taste, because it is a project to restore the collective memories of Taipei people. 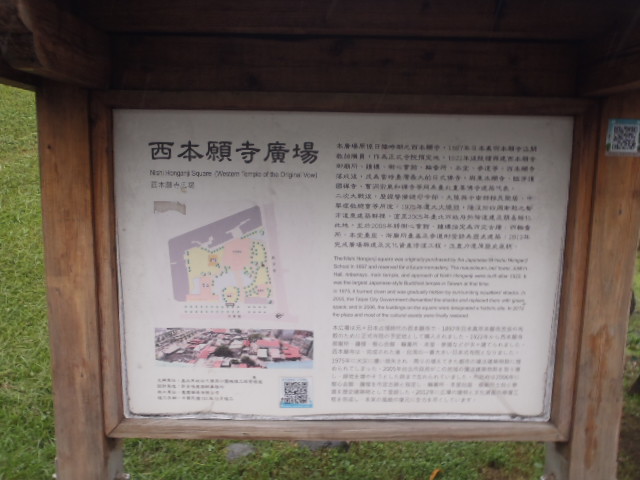 A corner of the Nishi Hongahji square